Effective October 1, 2015, the Florida Legislature has amended the statute regarding the health care surrogate form. Up to now, the form has provided that the surrogate’s authority becomes effective only when the principal is incapacitated, but there was no indication as to how incapacity is determined.

Durable powers of attorney, which can cover health care decisions, as well as financial decisions, become effective immediately when signed. Springing powers of attorney, meaning those that became effective later, are not permitted in Florida. Even when they were permitted, most attorneys avoided them because the determination of incapacity was uncertain. We at Pyle & Dellinger, PL, have used a durable power of attorney for health care in addition to the surrogate form, partly to avoid the problem of determining capacity.

Pursuant to Fla. Stat. §765.203, as of October 1, 2015, the party creating a surrogate form has the following three options as to when the authority becomes effective:

It has always been true that even if the surrogate form is in effect, the principal can still speak for himself or herself.

Our practice is to encourage clients to choose effective immediately. Thus, we have placed that choice first. Because the principal always has the ability to override the form.

As is generally the case, the statute states that health care surrogate forms executed under prior law remain in effect. Thus, one does not have to replace the form with a new form. But if one wants to make the surrogate form effective immediately, as we suggest, then it would be best to execute the new form. 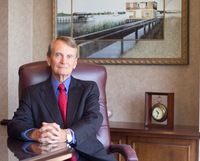